Have you ever offended someone without meaning to? Well, read on. The screw-up in our second story today takes the cake. 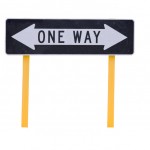 As a speaker or writer, sometimes you just aren’t clear enough or your message gets misinterpreted.

Most of the time, the results aren’t too serious, just annoying.

My partner, Tom, and I agreed to meet at a big box home improvement store a couple of years ago to look at some shower doors. We both showed up on time.

After a few minutes of waiting and looking around for each other, one of us phoned the other exasperated and said something like, “Where the heck are you?”

“I’m in the shower and bath section.”

“Which store are you at?”

We live halfway between the two stores. The phrase, “I’ll meet you at Lowe’s at 7:30” wasn’t sufficiently clear.

The cure for this kind of miscommunication is simple.

Be specific with the nouns and verbs you use. “I’ll meet you at the Airport Road Lowe’s at 7:30.”

Don’t assume the other person can read your mind.

You have to clarify and verify, even though it takes extra time. When you’re the receiver, ask questions to clarify what’s expected of you. When you’re the sender, verify that the person has understood you by having them tell you what they’re going to do in very specific terms.

We’ve started to do this pretty routinely in the office, and it helps.

Sometimes, though, the problem isn’t lack of clarity.

During World War Two, butter, cooking oil, and rendered fat were in very short supply. Whatever was available was going to the war effort. Grocery stores would collect containers of bacon grease and the like for re-use.

It’s hard to imagine today, but housewives would routinely collect the fat they poured off from cooking into a coffee can or whatever and bring it to the store when they went to shop.

And most shopping was done on Saturday, which created a problem. Lots of people shopping in the store and not enough space for the containers or people to handle them.

One grocer came up with an easy solution. Let’s have ‘em bring in their containers Monday through Friday when we’re better equipped to process them. So, he posted a big sign in the front window of the store with a request:

Doh! Now, clearly the grocer didn’t intend to offend his customers, but it illustrates an important principle.

The meaning of a communication lies in how it was received, not what was intended.

That means the burden is on us when we speak and write, whether it’s giving instructions to a staff member or presenting a speech, to say what we want to say in a clear, unambiguous way that isn’t subject to misunderstanding or misinterpretation.

You have to work at it. Vague doesn’t work. Be specific.

Proofread what you write, and have other people read / listen to your stuff to make sure it’s on point, it isn’t confusing, and that it isn’t inadvertently sending the wrong message.

It’s worth the time and effort. Part of being a professional involves being precise and meticulous, not just in your craft, but in your communication as well. And if communication is your craft, as it is for coaches, counselors and consultants, it’s doubly important.