Businesses have a unique personality just like people do. Sometimes it isn’t easy to see from the outside … but sometimes it is.

Take Southwest airlines. It’s founder and CEO until 2008, Herb Kelleher, is quite a character … a guy who never confused being serious with being somber. In one of his official CEO photographs, he’s sticking his tongue out at the camera. The people at Southwest are encouraged to have fun and keep a lighthearted atmosphere. It makes a difference.

Contrast that with the now defunct Eastern Airlines. Eastern operated cattle cars with wings. Their slogan was, “We have to earn our wings every day.” What they earned instead was the contempt of their customers. Their slogan should have been, “Sit down and shut up. We’ll get you there.” That’s the attitude they had.

So, what does this have to do with you and your business? Well, ask yourself, what kind of personality does your business have? What does the world see when it looks at you? 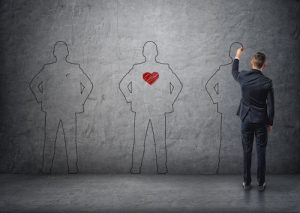 Back view of a businessman drawing men’s silhouettes on concrete wall. The middle one with red heart in its chest. Office staff. Collective, crew, personnel.

There are a lot of things they could see, but the two aspects of your business personality I want to key into are something I’ll call “authenticity” and sense of mission.

Now, all you have to do is look at the wealth of image advertising on TV, in print, billboards, social media etc. to know every company wants to be seen as having these qualities and they spend a lot of money to promote the notion that they’re something more than just soul-less combines, but how real is the perception they’re trying to create?

It’s not real at all. It’s mostly just PR hype. It’s phony. People know that and they’re sick of it.

And that’s why when you’re genuinely able to BE a business that’s authentic … that has a heart and a soul and a mission … people eat it up. Because they’re starving for the real thing in life.

That’s all it takes … something extra coming from inside the people in the organization that conveys to people … often in small and seemingly insignificant ways … that you’re different and a better outfit to do business with.

I mean, can you imagine Southwest ever having thuggish “security” personnel boot a passenger off a plane they overbooked? Never. Wouldn’t happen, because that’s just not who they ARE.

And why you do what you do is as important to many people as how you do it. What’s important to you? What makes you tick? What motivates you? What’s your mission?

There’s nothing wrong with makin’ a buck, making a living. I’m all for making a profit. AND … there has to be something else there … something in your outlook and make-up and focus and purpose that attracts like-minded people to you.

Let people know what drives you to do what you do and offer what you offer and those who are looking for that very thing will find you.

So, I want to leave you with a couple of questions.

If “the world” were to describe your business in terms of your authenticity and sense of mission, what would it say?

And, if that’s not everything you’d want it to be, what can you do to improve the world’s opinion?