Say you want to run a 544 mile race.  You’ve never run anywhere close to that far before.  You have no racing experience whatsoever.  You’ve never had a coach.  You don’t have “proper” equipment.  Oh, and you’re a 61 year old potato farmer.

You have to take your false teeth out when you run, because they rattle. 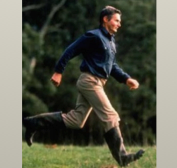 Hardly.  You’d be lucky to survive, much less finish.

Winning would be absolutely impossible.

I mean, we’re talking about an incredibly grueling race, an ultramarathon, run over the course of some 6 days, and you’d be competing against some of the best conditioned, best equipped young athletes in the world.

Okay, then how do you explain Cliff Young?

The guy shows up at the starting line of the 1983 Sydney to Melbourne race, ready to go … I’m not making this up … in Oshkosh overalls and rubber “gumboots.”

The race starts and everybody disappears in the distance leaving Cliff to shuffle along behind, running the way you do when you’re herding animals in a wet field, Cliff’s main form of “training.”

So, how did Cliff not only win the race, but smash the record time?

He was ignorant.  He didn’t know any better.

So, he ran continuously for 5 days straight … through the night … never stopping except to eat and go to the bathroom.

Oh, and the boots turned out to be very easy on the feet vs. running shoes when it was raining.  Kept ‘em dry.  Go figure.

He did the impossible.  He won the race.

So, how does what Cliff did relate to you and me?  Is this a story about having a seemingly impossible goal and reaching it … that “Whatever you can conceive, you can achieve?”   You bet.

Is it a profile in endurance … an incredible display of mental and physical toughness?  Oh yeah.

But what makes this story really special is that Cliff Young re-defined what was possible.  How?  By not being hemmed in by conventional thinking.

He did things differently than they’d ever been done before.

Now, Cliff did it differently, because, luckily for him, he simply wasn’t aware of conventional thinking in the ultramarathoning world.

For us, we can’t undo our awareness of the “right way to do things” or “the way things have always been done.”  So, the challenge for us as business owners is to look at our operations … our practices and procedures … each day with newborn eyes, to actively question the way we do things.

Do I really need to do it this way?  Why?  Is there a better way?  What would happen if we did X or Y instead?

That’s the question at the heart of every breakthrough we make, from our most modest incremental improvements to our most radical transformations.

They have a name for this process in industry.  It’s called “continuous improvement” and there’s a method for going about it and tools to help you implement the method.  The Japanese used the process to surge ahead of the competition in the car business back in the 80’s.

But you don’t need any tools.  The trick to making it work is simply to look for areas where you can improve … continuously … as in daily.  Make it a mindset. Question everything … continuously.

Is it easy to do?  Nope. It’s quite hard, at least at first. Like any habit, it takes a while for it to become routine, but the payoff is huge. With each innovation, with each improvement, big and small, you make yourself better and set yourself apart.

And in a world full of smart, capable people, that’s how you “win the race” … by channeling your inner Cliff Young and doing things a smarter, better way.

P.S. You’ve got to watch this video showing Cliff in action.  It’s less than 2 minutes and it left me in tears!