It’s clear you need to do something … make a change. But you aren’t doing it! You’re reluctant … if not outright resistant. You’re anxious … if not flat out scared.

What’s going on? What’s the problem? It’s the logical next step. It’s the clear path forward. Just do it! What’s stopping you?

Yeah, well, it isn’t logic that’s calling the shots, and it usually isn’t the particular change in question that’s causing you to hesitate.

It’s change itself. Change sets off a stress reaction … in most, that is. 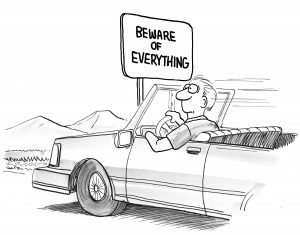 Some people are thrill seekers by nature. Something in their makeup allows them to not only tolerate but actually enjoy what most of us would see as real … or at least potential … threats to our well being. We all know someone like that.

I’m guessing those folks handle change better than the rest of us too.

But most of us aren’t wired that way.

Why? We want to live! It’s our survival instinct at work.

And wanting to stay safe is just one step removed from the primal motivation to dodge the grim reaper.

We wouldn’t have survived as a species without having a few intrepid souls in every population who put themselves at extreme risk to push the envelope and try new things.

But we also sure wouldn’t have survived as a species if everybody behaved that way. The prime directive of every living being is to survive … to protect itself. And guess what. A whole lot of our mental, emotional, and physical processing has developed to do just that … to warn us when our survival’s in question

The problem is, the mechanism is set on a hair trigger and it often fires off warnings when there’s really no threat at all … or maybe just a psychological threat.

Okay great, so we’re safe. Well, as safe as you can be in this crazy world. But we’re also often locked up and afraid to proceed. It’s a clear case of too much of a good thing not being so good.

So, what do we do? How do we deal with this primal instinct and its influence on our ability to adapt to change and take timely action? How do we balance the need to protect ourselves with the need to move forward with intention to a brighter, sunnier place?

First, give yourself a break.

Don’t push it, and don’t beat yourself up. Acknowledge and HONOR the positive intention of the subconscious mind. And then let the decision simmer. Ponder it, but do it as an outside, third-party observer might. Don’t stress over it. Give the idea a little time to percolate … to form a new mental pathway … and not seem so scary to your inner guardian.

Allow yourself the freedom to remain a little nervous, to be a little afraid, while letting the resistance melt away. And focus your conscious thoughts on the positive expectations, the promise and the possibilities vs. the risks and the stumbling blocks.

Here’s the bottom line: It’s unrealistic to expect yourself or anyone else to enthusiastically embrace significant change at first blush, and maybe at second and third blush, without any concern. It’s just not who we are as humans.

But we didn’t get where we are today by hunkering down and resisting either.

So, treat yourself gently. Give yourself some space to be a little spooked. Understand that it’s all normal and part of the process. But be resolute.

Take a deep breath … and step into the light.