Jerry Seinfeld’s a funny guy. That said, I’ll bet you could name several comedians you think are funnier.

But can you name any who are richer?

No, you can’t, because he’s by far the richest. So how did he get so rich? 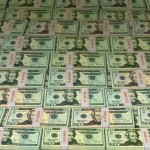 Because he worked at it … every day. And when I say every day, I’m not speaking figuratively. I mean every day.

A blogger named Brad Isaac tells about the time he got a chance to talk to Seinfeld when Isaac was a newbie trying to do comedy. Seinfeld gave him some advice:

“He said the way to be a better comic was to write better jokes and the way to write better jokes was to write every day. He told me to get a big wall calendar that has a whole year on it and hang it on a prominent wall. For each day I write, I get to put a big red X over that day. After a few days you’ll have a chain. Just keep at it and the chain will grow longer every day. You’ll like seeing that chain, especially when you get a few weeks under your belt. Your only job then is to not break the chain. Don’t break the chain.”

So, you gotta be good at what you do and inspiration is important, no question, but the message here is pretty clear. The key to success isn’t so much inspiration as it is dedication … working ON your business as reliably as you work IN your business. And that means sticking to a regimen.

As Woody Allen famously said, “80% of success is showing up.” Same song, different singer. But he later added more.

“My observation was that once a person actually completed a play or a novel, he was well on his way to getting it produced or published, as opposed to a vast majority of people who tell me their ambition is to write, but who strike out on the very first level and indeed never write the play or book.”

Another guy, who, like Seinfeld and Allen, has produced a tremendous amount of successful work is the humorist and social commentator, P.J. O’Rourke. He writes 1,000 words a day.

That isn’t that much. This newsletter will be around 650. But he writes every day. And when you do anything every day, after a while you’ve done a whole lot of something. It doesn’t have to be writing or anything creative even. Just focus on what it is you want to become great at on a daily basis and you almost can’t help but succeed. Maybe not $820,000,000 worth, but you’ll succeed where others fail … or where others simply dream and never do.

And let’s get something straight. Having discipline … sitting down to do what you do on a regular schedule … doesn’t preclude inspiration. It creates an opening for it. Sure, sometimes great ideas come while I’m in the shower or not thinking about my business at all. And that’s most excellent. But guess what, they also come when I consciously invite them.

Am I personally working ON my business on a regular basis an hour or two a day? No. I need this system and I’m going to use it! And I invite anyone out there who wants to take up the challenge to just hit reply and tell me what it is you’re going to work on and for how long each day.

Are you up for joining me?

I want to hear from you. Let’s go for it!