Remember bedtime when you were three?  What did you want?

You wanted to hear a story.

And now that you’re an adult, what’s changed?

Nothing.  Stories still capture our attention.

They also help us make sense of the world by making the abstract concrete.  They “put a face” on an idea.  They personalize our understanding. 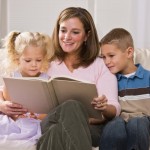 Say I’m an expert in criminal justice and I want to examine the difference that style and approach can make in police work.  Which would be more effective … if I talked about it or I showed you an episode from the Andy Griffith show where Barney goes by the book and Andy uses common sense?

How about both?  Make your point AND illustrate it with a story.

But don’t leave out the story!  The story’s what “sells” the idea.

A story can sell your product or service too.

We don’t eat a lot of bread at the Mencer house. Why?  Simply because it’s processed food … a starchy carb type of processed food at that.  And we eat very little processed food.  I NEVER go down the bread aisle in the grocery store. Never. And, if my husband ever picks up a loaf, it’s always sprouted grain Ezekiel bread.

One day, I was at a food fair and saw a flyer for Dave’s Killer Bread.

It had a kind of silly picture on it of a muscle-bound man with longish hair and a mustache playing a guitar.  I assumed it was Dave.

Intrigued by the name and cartoonish picture, I read on. Dave’s Killer Bread is organic and non-GMO verified.  It’s high protein.  Okay … good for bodybuilders like me.  It has flax, sesame, pumpkin, and sunflower seeds hand-wrapped around each slice.  Other ingredients … hmmm, let’s see … amaranth, barley, spelt, and quinoa. Okay … more intrigued.  But seriously, this is bread, and I don’t eat bread.

So what made this girl buy a loaf?

I wouldn’t have done it if the ingredients were junk.  It had to deliver on that score.  And their packaging piqued my interest.

But Dave’s story made the sale. It appears Dave is an ex-con.  He spent 15 years in prison.  When he was released, he found an opportunity to reinvent himself in the family bakery.  And now he’s an entrepreneur.  Don’t you love a happy ending?

Between the lure of healthy ingredients and Dave’s story, I decided I wanted to try this bread.  Me, the girl who never buys bread.

So, what does that tell us as business owners?  Stories sell, as long as there’s something of substance you’re offering people.

Are you using stories to sell your services or products?

Budweiser does it, and believe me, they know what works.  In 58 seconds, we see the adorable little colt growing up to be a Clydesdale and taking his place with the team.  Awwww.

It isn’t about the beer.  It’s about the feeling you get, a feeling that’s powerful enough all on its own to make people buy.  And when you have reason … logic and evidence … working for you too, it’s an unbeatable combination.

But that’s a product.  What about a service?

It’s even easier, because you’re able to tell the story of real people going through real challenges who you’ve helped achieve real life-changing results.  And like Dave, you can tell your own story.

Don’t hold back.  Allow yourself to be a little vulnerable.  Sure, you’re a professional, but people want to see your human side.  They want to know you’re a real person who’s gone through many of the same things they’ve gone through.

In a world where there are lots of people who do similar work competing for business, you need to stand out, and being able to tell a compelling story helps you do just that.

And the bread?  It was good.

But hey, I don’t eat bread.