Mark Twain famously said, “Never put off until tomorrow what you can do the day after tomorrow.” Mark was pro procrastination.

But everybody I know is anti-procrastination. We beat ourselves up and judge others for not doing the things TODAY that “should” be done TODAY.

It could even be said that, if you procrastinate, you’re not a righteous person, given that the word really gained its first usage as applied to those who dared to put off repenting of their sins.

A little too heavy? Oh yeah, but think of how much better life would be if only we weren’t so lazy. 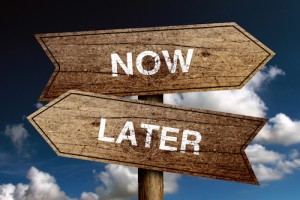 Whoa. Wait just a minute. I don’t know about you, but I’m not lazy and I procrastinate. I’m a doer, a go-getter, an overachiever … and a procrastinator, on occasion. So, what’s that about? Sure, some people put things off simply because they’re feckless and lazy, but that’s not me and it’s not you.

So, why do productive people procrastinate? It’s not about laziness or even the lack of time management skills, although those help.

I can think of four basic reasons. See what you think.

1) You’re not really mentally and emotionally ready to take on the task. It just doesn’t feel right at the moment, so you wait for “inspiration.” Sometimes putting things off when you’re not fired up makes sense, but, then again, it’s easy to use lack of inspiration as an excuse.

2) You don’t want to feel bossed around by a schedule. We resist “having” to do things, even when we’re the ones who put the job on the list in the first place!

3) The task is unpleasant.

4) We’re not exactly sure how to do something and, feeling uncertain, we decide to wait for clarity. This is the biggie in my book.

But usually the “how to” remains as mysterious tomorrow as it was today, and so we keep pushing the thing off till we can push it off no longer, staying busy with all sorts of far less important tasks in the meantime. Gotta organize that sock drawer!

And then we do the thing we’ve been putting off and almost invariably here’s what we say when we’re done:

“Oh, that wasn’t so hard … and it turned out great. I wish I had just done it, rather than worrying about it” … for days or weeks or months … or years.

I’ve had this very experience around writing a new speech. I was really excited about the subject … peak performance lifestyle. I’d created a new coaching program around it, and yet, I hadn’t written a thing, despite scheduling blocks of time to work on it.

Talk about an energy drain, but then I did finally sit down and create a big chunk of it. And you know what? It’s good and I had fun. Funny how the actual experience is never as bad as you fear it’ll be. Go figure.

So, why couldn’t I do what I wanted and needed to do?

Well, when you’re not sure of exactly where you’re heading with something and you don’t want to screw it up, it’s a little like walking into a dark room in search of an object and not wanting to trip over anything. How are you going to proceed? Carefully, or better yet, not at all.

I believe procrastination is your subconscious self’s way of protecting you, of keeping you safe. It doesn’t want you to trip over something in the dark and hurt yourself, metaphorically speaking, so it encourages you to put the search off till later. That’s the part of your brain that seeks safety and security above all else, and you have to respect and honor that intention.

So what do you do?

Don’t beat yourself up. Free yourself up. How? By acknowledging your reluctant “board members” and reassuring them that this is not an unsafe activity. And then, by just diving in, knowing at a conscious level that things will turn out fine even if you don’t know how they will exactly.

Diving in. Hmmm. Here’s a very short video from Brian Tracy to help you with that aspect.

I hope you enjoy it.