And some are Maybes.

Let’s say you have someone who’s expressed interest in your professional offerings. You’ve talked with them, and they’re impressed by you and intrigued by the possibility of working together. Sure enough, they may want to hire you.

Cool. But they’re not sure. Let’s say they’re a definite “Maybe.”  Never mind why exactly.

A) Do whatever you need to do to convince them to become a client, because only when you’re persistent and persuasive are you ever going to convert the maybes into clients? 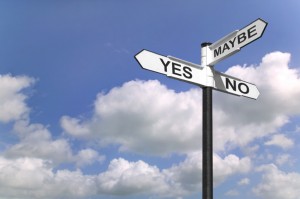 B) Let the person decide on his or her own? If they want you, they want you. If they don’t, they don’t. Typically, you leave it as, “Call me back if you’re interested.”

C) Always keep open the possibility of that person becoming a client at some point, even if it isn’t right now? Never foreclose on the hope that, sooner or later, that business will come through for you.

D) Do what you can to let the person know what you can do for them, answer any questions they may have, set up a time to talk again if they’re amenable, and otherwise move on with your life and business?

E) Spend your time and energy keeping the flame alive? Call them or email them periodically to remind them you’re there for them.

Let me start by telling you what a lot of people do. A and E. They pursue the would-be client. Not only is that not cool, it won’t work.

Sure, a “maybe” gives you some license to engage in further dialogue with someone and follow up with them … if they give you permission … but it doesn’t allow you to do the marketing equivalent of stalking.

On the other hand, some folks take a completely hands-off, que sera sera approach. That’s B.

Then, there are those who spend too much time and energy getting attached to wanting the person to become a client. Hey, it’s okay to keep the hope alive … C … but it has to be in the spirit of creating an opening. It can’t come from need. And, as nice as holding out hope sounds, it disengages the gears. It keeps you from moving forward. It’s easy to get stuck in neutral hoping and waiting … waiting and hoping.

The “right” answer is D. Why? Because we say so!

How so? Well, the client gets the freedom to decide without pressure, but also has access to you … to talk further if they like, to ask questions.

You get to make sure the client has the information he or she needs to make an informed decision. You serve them … and then you can let go and move on.

But it’s hard for some practitioners to let go once someone’s expressed interest. Part of it may be self-serving. They want the client and would hate to lose them due to lack of effort. But it’s also because they genuinely think they can help the person and would like to convince them to sign on.

Let it go. Give up the attachment. Be there for the person, but don’t act as if a maybe is just a challenge to try harder.

That’s the attitude I’d advise you to adopt. Be there for people, for sure, but don’t get rattled by the people who say No. And don’t let the waiting and hoping for the Maybes keep you from moving forward. Keep moving forward.

Who knows, the perfect new client might be standing right in front of you, eagerly waiting, but you have to be looking forward to see them.

One more question: So what’s the most powerful word in your sales vocabulary?

All the best –
Denise