Please, don’t worry so much. Because in the end, none of us have very long on this Earth. Life is fleeting. And if you’re ever distressed, cast your eyes to the summer sky when the stars are strung across the velvety night. And when a shooting star streaks through the blackness, turning night into day, make a wish, and think of me. Make your life spectacular.

– Robin Williams from the movie Jack

I loved Robin Williams from the time my daughter and I watched him on Mork and Mindy over 30 years ago to the time he blossomed as a film actor and gave us so many great films like Dead Poets Society, Good Will Hunting, Patch Adams, and Awakenings, not to mention the lighter, funny films.

Such a nice guy. Such a manically funny guy. Such a good actor. He made me laugh. He made me cry. And the shock at his passing. It’s like you lost a friend. Only 63. It seems so wrong. 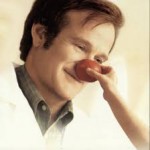 Having just turned 60 this month, I can’t help but wonder how many years I have left, and not just years, but good years. How much time remains to make my life spectacular? Is there anybody out there who doesn’t think the same thing and ask the same question?

It was a sad ending, and, believe it or not, some people criticized him for committing suicide. That’s strikes me as so unseemly and pointless.

None of us can ever know what someone was suffering through when the thought comes to them to end it all. It doesn’t seem as if it’s up to us to judge … just mourn.

I know it’s been a while now since he died and people have moved on to other things. I understand, but he provided me with so many wonderful moments and such a wonderful example of a giving person that I just wanted a chance to say, thank you.

Somehow, in that formless domain beyond space and time, I imagine that heartfelt sentiment might just get through to him and he’ll smile and know I thought he was spectacular.

I would say, rest in peace, but can you imagine?

He’s probably doing comedy at 100 miles an hour … completely on the fly … up in heaven right now.

So instead, I’ll say:

When I see a shooting star streaking through the blackness, I’ll make a wish and think of you … you wonderful, funny, endearing man.