Sometimes people can’t tell you what they want.

They’re so tied into the what’s-so of their current reality they have a hard time seeing beyond it.  That’s why we need visionaries.  And why you need to be a visionary.

Steve Jobs was a visionary.  He didn’t ask people what they wanted.  They wouldn’t have been able to tell him!  That’s how far ahead of the crowd he was. 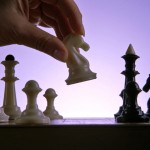 Almost no one would have said, “What I want is a small device that can store all my music in digital form, something I can download songs to and have it play back the music flawlessly,” because such a thing couldn’t even be readily imagined.  It took Jobs to imagine it.

But the need for it did exist.

People had been listening to music on portable devices for awhile.  Jobs saw that if he could create a small gizmo that would allow people to buy individual songs rather than a whole album … for 99 cents each … store an enormous amount of music digitally, and play the music back literally on the run with no interruptions or skipping … well then, people would buy it.

He observed what people did with their music and he imagined a new and better system.

Like a good chess player, he was thinking three moves ahead.  Or, as the all star hockey player, Wayne Gretzky, is famous for saying, he was “skating to where the puck was going to be, not where it had been.”

So, what does that have to do with you and me out here running our service-based businesses?

You have to be the visionary for your clients when they can’t see the direction they should be headed or the next steps to take.  As a trusted advisor, it’s what you do.  You practice this three-moves-ahead kind of thinking for them.

I’ve had people tell me they feel as if they’re in a fog and don’t know which way to go.  And they want me, as their consultant, to help them navigate outside that fog and define a clear future further out than they can see or even imagine … or assist them in doing so.

It’s your chance to really provide value for them.  Because you can see things going on in their industry and their world as an outside, objective observer that they may not be able to see themselves.  Maybe they’re too close to the situation to see the big picture or too wedded to a certain way of doing things to be as imaginative and innovative as they need to be.

I have a lawyer client, who’s been a very successful service provider for 20 years.  The area in which he practices was once a thriving, much needed offering. Over the last several years, due to economic and political changes, the need for the service he provides has diminished greatly, and he’s now facing a crossroads.

Is there enough of a need left and are there enough potential clients to keep doing what he does, or does he need to shift his expertise to meet the current and future needs of the market?

If it’s the latter, how does he do that?

He can do what Steve Jobs did.  He can look at the problems people in his target market are experiencing, especially newly emerging problems, and ask a few questions:

If I could help solve this problem I’ve identified, would people want and need what I’m offering and be willing to pay for it?

If yes, then how do I come up with an innovative way to solve the problem in a way that sets me apart and gives me an advantage?

The key is observation.  You need to look at what your people are struggling with.  What are they worried about?  What are they complaining about?  Hang out with them.  Read what they’re reading.  What trends or patterns are emerging?  Get inside their heads and then figure out how you can help them.

Does this kind of intense focus and creative thinking guarantee you’ll come up with some whiz-bang solution?

Absolutely not, but it’s the kind of thinking that does produce innovations.  And one thing’s for sure.

If you don’t practice this kind of three-moves-ahead thinking, you’re almost guaranteed to be lagging the parade and your chance of coming up with breakthrough ideas is virtually nil.

So, stand out from the crowd in your own business by anticipating where your people are going … and then get there before they even know they want what you’re offering.

And help your clients do that very same thing.