What moves people to action?

What is it that flips the switch, making someone go from merely considering an idea … even thinking it’s a good idea … to getting behind it and acting on it?

It involves 3 kinds of “appeals.” He labeled them credos, logos, and pathos.

In plain English, what wins people over is a thoughtful combination of the following.

What you say makes logical sense and the evidence you present is compelling.

What you say or do speaks to people’s emotions. It has the power to move, touch, and inspire.

Why am I talking about this? 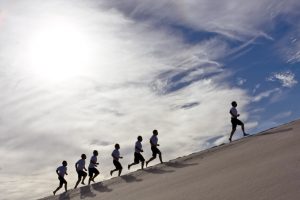 Because, no matter how smart or talented or dedicated you are, you can only do so much in this world … or your business … or your community … or your team … by yourself.

You need to be able to inspire and engage other people to enthusiastically join in.

It’s a central part of what makes a great leader a great leader. It’s the springboard from which extraordinary outcomes are achieved.

What you want as a leader, whether you’re a CEO or a thought leader in your field, is to engender a powerful sense of ownership, belonging, and commitment … to an idea, a vision, a mission, a method, a set of values.

So, let’s break it down and see what it takes to connect at this kind of deep level of commitment with people.

Credos: They have to trust you. There are two aspects of trust. There’s the trust you EARN by your deeds, your experience, your expertise. People trust you because of your reputation and the testimonials of others. You deal straight. You’re fair. You tell the truth.

And then there’s the trust you engender simply by the way you present yourself … your personal presence.

This second level of trust is superficial and can be used to manipulate. Think of the slick con man. But it’s still important. If people get a bad vibe from you, they may never get past the first impression.

But here’s the most important thing about trust.

You’re goin’ nowhere without it.

And that’s why personal integrity is of such bedrock importance … because it’s so easy to lose people’s trust and so hard to earn it back.

Logos: You have to have good arguments and solid evidence … facts, figures, examples, demonstrations, expert testimony.

Carl Jung said there were two kinds of people when it comes to analysis and decision-making … thinkers and feelers.

And if there were ever a truism in the field of decision-making, it’s this. Humans tend to make decisions based on emotions / feelings and justify them with logic.

So, basing inspirational and persuasive appeals predominantly on logic will mysteriously fall short for the thinker time and time again.

Their lament: “But what I outlined made so much sense!”

What’s missing in their understanding is that we are psycho-logical creatures. We aren’t like Mr. Spock.

Logic influences our thinking, but it doesn’t rule our decision-making.

Pathos: You have to speak to the emotional being.

In terms of interpersonal relationships, this means showing interest in people’s lives … what they’re dealing with and what their aspirations are. It’s not just about the bottom line or getting a job done. A leader who gains the love and respect of her people magically finds herself with an “army” who will follow her anywhere.

In terms of persuasion, your appeal moves people emotionally and make them say yes … even to things that might not make that much logical sense.

Think about it. Designer clothing, purses, shoes, etc. wouldn’t exist if we were driven solely by logic.

On the flip side, an appeal to emotions that’s not coupled with solid logic is shallow. But that’s the very approach used by the unscrupulous to manipulate people.

Next time, I want to demonstrate how all three of these appeals worked together in one of the most iconic and successful ad campaigns in history.  Because NOBODY understands Aristotle’s message better than advertisers!