It keeps us sharp and spurs us to greatness, since we’re always looking for better ways to do things, ways to get an edge. And that benefits everyone, from the individual competitors to society at large.

If people don’t work together toward common goals, if they don’t co-operate with each other, there’s no civilization, no progress, only personal advantage-seeking. Dog eat dog, the other guy be damned. And that’s not a world anyone really wants to live in.

I don’t think anyone would seriously disagree.

But what happens when the virtues of competition and cooperation come into conflict. 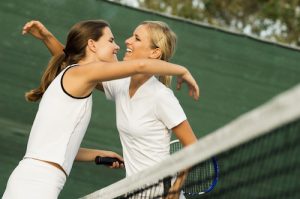 Tennis Players Hugging Each Other After Match

If you have two competitors seeking the same prize, you can’t exactly expect them to cooperate with each other. One is out to beat the other, because in any individual competition, most of the time, it’s a zero sum game, with a winner and a loser.

But consider this. There has to be a measure of cooperation even in the fiercest competitions. How so? There has to be an agreement with regard to the rules of play. No hitting below the belt in a boxing match. No bribery in a battle for business.

Why? Because there’s something more important at stake than winning any individual contest, and that’s maintaining the ability to continue playing the game … the need to preserve the integrity of a system that allows us to compete and thrive in the first place.

Once the rules are broken, once integrity can be sacrificed for personal gain, the whole thing starts to crumble.

We know this intuitively. It’s one of the reason why we love stories about competitors being good sports and treating their opponents with dignity and a touch of humanity.

We saw such a display when a woman hit a homerun in a college softball game only to tear her ligament as she was rounding first. Had her teammates assisted her, she would have been called out. Had they put in a substitute, the home run would have become a single. That’s when members of the opposing team picked her up and carried her around the bases. Humanity shining through.

We saw it again at the Olympics in Rio when two runners fell in the 5,000 meter race. Most of you probably saw it. Two fallen competitors, who didn’t know one another, encouraging each other to finish, helping each other finish.

Competition is in our natures. But so is helping and cooperation. I think most of us have an intuitive understanding that we’re all in this race together and it’s for the good of us all when we treat each other the way we would like to be treated, even when we’re after the same thing.

Too bad that’s not always how it works.

A lawyer client of mine was competing for the same piece of business recently with another lawyer. They knew each other and had worked on opposing sides of many previous cases.

It turns out my client’s competitor was bad-mouthing him. That’s the equivalent of unsportsman-like conduct. My client ended up getting the new piece of business, but you can bet the trash talking will color their relationship into the future. And it demeans the profession.

Contrast that with a scenario where another two lawyers were competing for the same business. Again, they knew each other. Rather than each submitting separate proposals, they decided to collaborate and submit a proposal that allowed both of them to work with the client in their respective areas of expertise.

The client was thrilled with the approach. Win-win-win!

Which just goes to show you, even in a competitive situation, there can be respect and even cooperation.

And in those cases where there can be only one winner and a loser, we all have an obligation … to behave like champions throughout the contest, regardless of the result.